Museum: One of Creede’s most popular attractions, the Underground Mining Museum comprises a series of rooms and tunnels blasted into the cliff face of Willow Creek Canyon at the north edge of town. Visitors receive a first hand taste of the miner’s subterranean experience through a series of demonstrations and exhibits in shafts bored specifically for that purpose. Exploring both early silver mining techniques and more recent technology, the Underground Mining Museum provides a fascinating insight into a very important part of western Americana. An exhibit hall with mineral and artifact displays provides a colorful prelude to tours guided by experienced hard rock miners.

History of the Museum: Creede, as it is today, evolved from a history rich in mining and scenic surroundings. Silver was discovered here in 1889. Mining was the area's main industry through the years until 1985, when the Homestake Mining Company closed down the Bulldog Mine. The concept for an underground mine began with Bob Louth in 1976, when he proposed building an underground fire station. This project was so well accepted that in 1990 local citizens decided to build a Mining Museum and Community Center. Three Creede miners began breaking rock in November, 1990. By 1992, the mining portion of the Museum was completed and most of the displays were in place. While the Museum and Community Center have never been used for the commercial production of silver, the spaces were 'mined' from solid rock and are an authentic example of the methods and techniques used in the 'boom' days of the silver rush in Creede, Colorado. 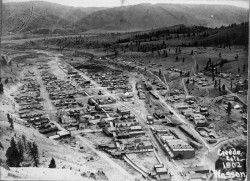 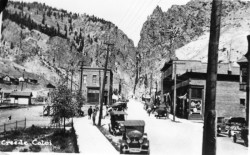 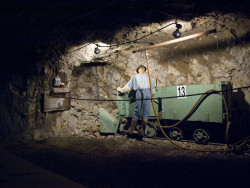 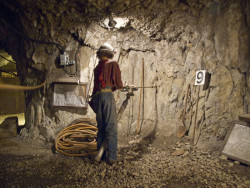 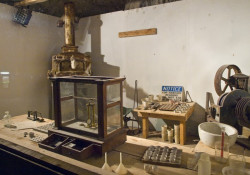 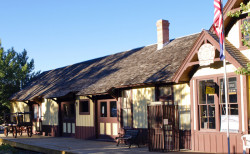 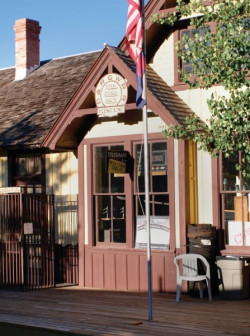 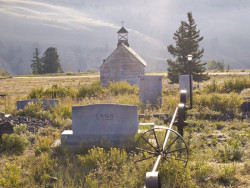 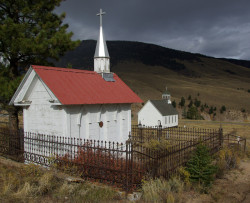 Fences of aged wrought iron and weathered wood commemorate the final resting places of generations of hard-working people who established this legendary silver mining town in the heart of the San Juan Mountains. At the south edge of Creede, turn off Hwy 149 to Lake City onto Bachelor Road. Drive about a half-mile up Bachelor Road and turn at the directional sign (Stop 15 on the Bachelor Historic Loop tour). Creede’s historic Catholic church stands as sentinel in front of the Creede Cemetery.

Antique cars along Creede's Main Street. Historic buildings and names from a bygone era mark the quaint seven-block downtown section of Creede’s famous silver mining era. The spectacular Pillars of Hercules, volcanic cliffs rising nearly a thousand feet at the edge of town, frame Creede’s array of shops, galleries, eateries, lodging, and sundry services. Simply viewing the old downtown area against this magnificent canyon backdrop makes a visit to Creede worthwhile in any season. A "Walking Tour" guidebook provides detailed information about Creede’s historic buildings and downtown district. Being the only community in Mineral County, Creede serves as the commercial and government center for residents and visitors. Both the Mineral County Courthouse and the Creede Town Hall are located on North Main Street. Rio Grande National Forest maintains the Creede Ranger Station on South Main Street.