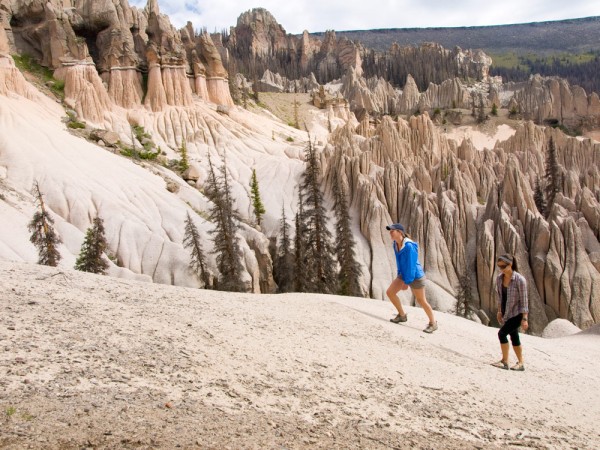 True to its name, Mineral County is a significant study area for ancient geologic activity. The formation of the La Garita and San Juan mountains began about 30 million years ago. Eruptions from massive volcanoes, like the Creede Caldera, were followed by tremendous flows of ash and mud. As the layers of volcanic debris cooled, crystals and mineral ores collected into veins and pockets to create extensive mineral fields. This era of mountain building laid down the volcanic tuff that has become the Wheeler Geologic Area. Water erosion then carved a starkly impressive landscape of fragile capstones, needles, and spires.

As you are driving along Highway 149, imagine that this landscape was an erupting volcano millions of years ago, spewing out rocks the size of houses. This area is part of a giant crater known as the Creede Caldera.

Stop 1. Airport Corner. At this location numerous plant fossils, mineral impressions and occasional insect fossils may be found on the hill to the north side of the road by parting the thin layered rock. After the formation of the Creede Caldera, a salty lake formed in the crater, which received palnt debris and sediment as they eroded down from the surround hills. This sediment eventually turned into rock that is mostly composed of very fine grained volcanic ash.

Stop 2. Point of Rocks. This area, just off Hwy 149 on Middle creek Road, is interesting because you can see several types of rocks from two different calderas. The Bachelor Mountain Member of the Carpenter Ridge Tuff was a flow of volcanic ash that erupted from the Bachelor Caldera, which is located somewhat north of, and predates by several hundred thousand years, the Creede Caldera. Near this formation is an outcrop of breccia (pronounced “bret’-shia”), composed of broken, angular rock fragments. Also at this stop is an outcrop of Snowshoe Mountain Tuff (another volcanic ash deposit) that erupted from the Crede Caldera about 27 million years ago.

Stop 3. Entrance to Rio Grand Campground. Here you’ll see an example of a lava flow overlying a debris flow, both associated with the first and by far the largest of the calderas to from in the area, the 1000-square mil La Garita Caldera.

Stop 4. North Clear Creek Falls. Here, North Clear Creek suddenly tumbles over tuff that erupted from he San Luis Caldera Complex – a family of three calderas that formed over a short period of time north of and probably slightly before the formation of the Creede Caldera.
RockHounding in Mineral County 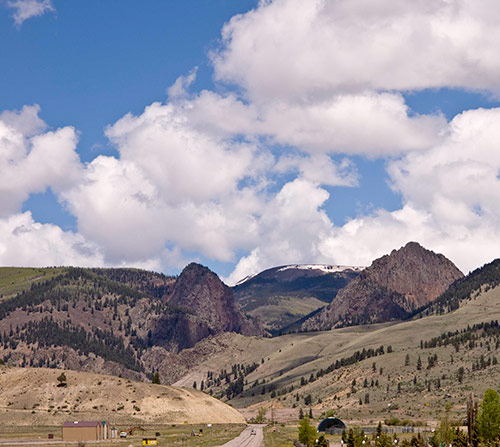 The following information provided by and courtesy of Charles V. Downing. Charles also offers a book: A Rockhound’s Guide to Creede Colorado. Contact the Creede Visitor Center to order a copy.

Mineral deposits made the Rocky Mountains famous. Explorers were enticed by them, Indians were antagonized, prospectors were rewarded, industries were born, and settlements were begun because of them. Today, a rich variety of ornamental stones attract collectors (rockhounds). Prospectors of today are very different from desperate men who flocked here just before the turn of the century. The new generation of prospectors still travels up between the vertical cliffs that form the gateway to Creede, as did the prospectors of the 1890’s. Creede’s founder would have liked this new generation.

Pool Table Road: at the 4 ½ mile marker on Pool Table Road, park in the pull-off area on the right. This entire park has agate and jasper scattered around. The predominant color is brown but it may also be black, red and white.

City Dump Road: 1½ miles southeast of Creede, turn left on the “City Dump” road and then turn right at the fork. Park at the Wason Barn. Walk about 200 yards to a ravine and there you will find flouresant calcite (green and sometimes cherry red) and it may also be translucent.

Creede Airport Corner: Travel South of Creede on Highway 149 towards Lake City for about 1.75 miles. This collection site is not on the Rio Grande National Forest administered land but is within the right-of-way of Colorado Highway 149. Look for Creede Formation Fossils.

Whited Creek at Phoenix Park: This will require a 4X4 vehicle. At the point of Phoenix Park where the jeep trail crosses the water, pull over and park. Follow the creek up stream ½ mile and there one can begin looking for geodes. Geodes will contain common opal.

Whiskey Hill Area: Travel South from the Creede Forest Office on 149 approximately 6.5 miles. Turn South (left) on to Middle Creek Road. Take the left fork to Ivy Creek Campground. Park your vehicle to the right of the road 10.6 miles from the Creede Forest Office. Look to the left (East). About three quarters of a mile East you will see the base of the mountain. Start hunting there. Look for a hole dug about halfway up the hill. Stay to the South out of the trees. Hike back and forth along the mountainside.

Farmers Creek Geodes: Farmers Creek geodes may be found by following the directions to the calcite outcrop. Continue East on the trail, after a two mile hike, you will reach Farmers Creek. Go upstream (North) for about one half mile. The geodes are found eroding from the banks of the creek. These geodes are filled with a gray to blue agate or quartz crystals.

Ute Creek Geodes: The Ute Creek geodes may be reached by hiking the Ute Creek Trail #819 at the upper end of the Rio Grande Reservoir. Start at the Ute Creek trailhead, crossing the Rio Grande River, continue up the trail to the geode bed. The Ute Creek geodes are similar to those found on Whited Creek. Legend has it that the Ute Indians mined this area for material to make arrowheads and jewelry. The geodes may be found about two miles up the trail from the reservoir. The trail crosses the upper end of the bed. You may also find small pieces of opal along this trail. Below the trail, down to the creek, many pieces of broken geodes may be found. Hunt above the trail also.

Stony Pass Area: As you reach the summit of Stony Pass, park at the right of the road in the small flat pullout. To the North (right) is Canby Mountain. Look for a shallow ravine running down the slope and ending East of where you have parked. Start up the ravine looking for small pieces of red jasper. The pieces get larger as you ascend the mountain. This entire slope has agate and jasper scattered around, but much of it is fractured.

Emma Mine Road: Travel southwest from the Creede Forest Office on Hwy 149. Turn South (left) on to Middle Creek Road. Take the left fork to Lime Creek Rd. #528. Go past the cattle guard and stay to the right at the intersection, #526 , Ivy Creek Campground and trailhead. Turn left on Forest Service Road #527. Approximately .8 miles turn left on to unmarked logging road, 4.3 miles at intersection stay to the right up hill. (four wheel drive suggested). Twenty miles from the Creede Forest Service Office, stop and look to the left and below the road. The material is found on the dump around the shaft. At this location, brown jasper with which the barite forms a contact, is found. The Emma Mine is up the road 1.3 miles. Park at the mine and hike around the area. You will be on a mountain peak at on elevation of 11,300 ft.